The task was the design and development of an autonomously flying target drone with jet engines. A major requirement is a maximum speed of 350 knots, corresponding to approximately 650 km/h and a mission duration of twenty minutes. Take-off is accomplished by means of a catapult, the landing using a parachute recovery system.

Drone design was undertaken using a calculation tool developed by SFL GmbH. Flight of the first prototype during initial flight testing was carried out by remote controls. Later we developed an auto-pilot and ground control was gradually reduced to way point inputs. In addition to the integration of radar amplifiers, target displays and other electronic components, SFL GmbH mounted several smoke cartridges for optical recognition purposes.  In order to fulfil operator safety requirements, an electronic flight termination system had to be developed which in the case of a power, radio or position control loss would initiate the controlled recovery of the entire system. The complete design was undertaken on the centre’s own 3D CAD system Mechanical Desktop 6, with the help of which system integration could be planned and prepared. Stressing was carried out using Mathcad, thus allowing simple subsequent use by future projects. 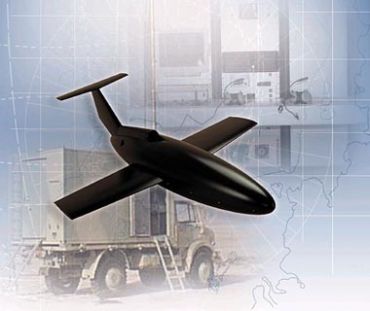 SFL GmbH is also centrally involved in flight testing. In addition we are also responsible for documentation.